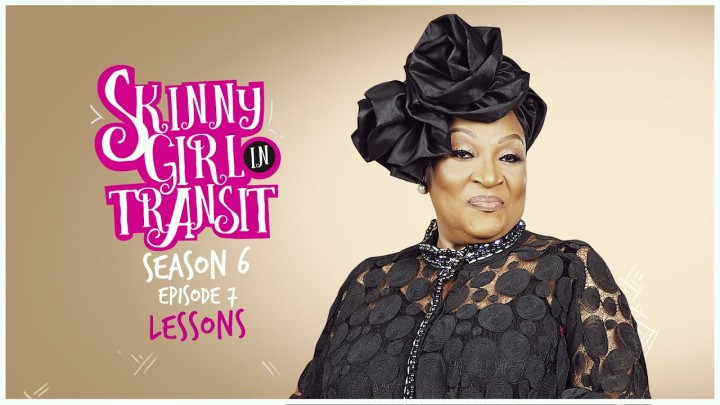 Tiwa’s Aunty Dupe is outside of the police station with officers attempting to bail her adopted kid out of jail. They tell her that because she is a woman it is not possible. Frustrated and concerned because she does not want her son to spend the night in jail she makes a call.

Tiwa & Mide are show together in what seems to be his home office. Tiwa came to check on her hubby before going to bed. He draws her in , holds her, and kisses her. Tiwa pulls away and Mide realizes that Tiwa still isn’t ready. He questions and pleads, asking what he can do and if he is doing anything wrong. Tiwa doesn’t have an answer for either question and before Mide can speak his phone rings. It is Tiwa’s Aunty Dupe calling. We see them next at his office at work. They are having a disagreement because Mide’s coworker advised her about her marriage and the struggles they are having. Mide explains that they had an innocent conversation when he was down. Tiwa understands but feels that someone she doesn’t know shouldn’t speak on such a private matter. Mide agrees and reassures her that he will speak with her to respect boundaries.

Shalewa is seen with her friend Tito at an art class. Shalewa isn’t interested in learning art. She is encouraged by her friend Tito to at least try and give it a chance. Doing something different will help her cope and deal with the heartache of a breakup. As they take their seats to begin painting a male model comes out and undresses. When he turns around Shalewa quickly realizes that it is Kwame. Kwame the same man she went home with the other night when she was drunk from the club. Embarrassed and overwhelmed she leaves the class. Tito stays. Kwame comes out to ask Shalewa why she reacted the way she did. He doesn’t believe in coincidences and thinks they should go out to dinner. Shalewa refuses. He pleads again and it seems she agrees. Next, in the market with Tito Shalewa runs into Maxwell. He compliments her, greets her, and kisses her on both cheeks. Once introduced to Tito, she leaves and Shalewa is left alone with him. He asks her out and Shalewa does not respond.

Mohammad is sharing a drink with Mide. He starts sharing how he cheated, made bad decisions, and how they are in the current situation because of him. He’s upset because Shalewa is responding in a very nonchalant way. He doesn’t like that he no longer has as much access as he used to. Mide reminds him that there were other issues in the relationship before he cheated. Mohommad firmly states that they were going to work through them. Mide isn’t convinced and lets him know that family issues are tough to navigate. He speaks from a place of experience and lets Mohommad know that the only way to get through it is to stand his ground, just as he did. He encourages Mohommad to not to beat himself up about his past mistakes. Instead he should think long and hard about how to find a solution to the current problem.

Sunshine before I get into anything I really need to know why this episode is only a little over 17 minutes?! It felt like a highlight video and/or movie trailer. Honestly, we’ve been robbed. We’ve waited quite sometime for Season 6, they shouldn’t do us like that. Now about the show…as much as I love Tiwa and Mide I’m not here for Tiwa only speaking when she is angry. No relationship, romantic or otherwise can thrive without communication. Even if she isn’t sure, I don’t understand why she can’t attempt to answer Mide’s questions. I am here for Shalewa though and all this attention she is getting. I hope she gets friendship out of Kwame and it won’t be just a rebound situation. I’m not even going to speak on Maxwell, cuz if you know you know. I’m also gonnna go head and put Mohammad with Maxwell cuz I’m over him too. As always looking forward to next week.

Welcome to my “little blog that could”, My name is Rachelle Lee and I am a teacher, blogger, and mentor. I’m also a daughter, sister, bestie, and the worst connect 4 player. Despite this, I love the game. I just think it’s really fun.  My purpose in life is to educate, encourage and empower those around me. I want everyone around me to become the best version of themselves and allow their inner light to shine through.

That’s where this blog comes in to help. Here, I will share all my tips, tricks, and thoughts on how to raise your light.

Until then you can find me with a cup of tea and a good book because no matter how hectic, I still must find time to stop and smell the roses.